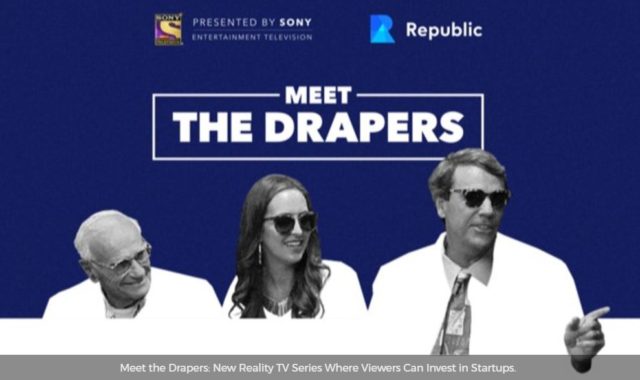 NEW YORK, Nov. 17, 2017 /PRNewswire/ — Ever watch your favorite investment show and wish you could get in on the action, too? Now you can! In the new reality series, “Meet the Drapers”, millions of viewers will be able to invest alongside the sharks — the Draper family, Silicon Valley’s top venture capitalists.

Meet the Drapers, the first series of its kind, allows regular people to become investors — right from their couch, while watching the show. This unique angle is made possible by the recent SEC regulations that for the first time opened investment crowdfunding to the public.

Investments will take place through the equity crowdfunding platform Republic, which has announced it will be Meet the Drapers’ official investment platform.

“Republic’s partnership is instrumental for the show’s success,” says producer Sarika Batra. “No other platform out there makes investing as friendly and easy, which is critical for the – often first-time – investors watching the show.”

“Crowdfunding is removing barriers like never before,” says Republic CEO, Kendrick Nguyen. “What was once viewed as an industry for a selected few is now accessible to everyone. And we’re thrilled to be part of a TV show that promotes entrepreneurship and enables greater diversity among both founders and investors.”

“South Asians – the show’s core audience – are a vibrant part of the Silicon Valley startup culture,” says Jaideep Janakiram, Head of the Americas at Sony Pictures Networks. “We created this show to showcase these trailblazing entrepreneurs, VCs and angels, and to allow our viewers to participate in their ventures.

“Meet the Drapers” is produced by Sarika Batra and is airing in partnership with the Draper Family, Sony Entertainment Television (SET) and Republic and sponsored by ICO Investor.tv.

About Republic:
Republic launched in 2016 with a mission to democratize investing. A leading equity crowdfunding platform and sister company of AngelList, Product Hunt and CoinList, Republic is part of one of the most prominent startup ecosystems in the world. On Republic, anyone can invest in breakout early-stage startups for as little as $10 in just a few minutes, using their credit card or bank account.

About ICO Investor.tv:
ICO Investor.tv is the title sponsor of the show. They are a trusted source of information for Initial Coin Offerings (ICOs) enthusiasts and ICO investors. Their sister site, NextGen Crowdfunding will provide data for all campaigns on the show, and a live Crowdfunding Ticker will display updates on investor commitments for each campaign. Through the Meet the Drapers dashboard, viewers can “follow” and track the deals they are most interested in.