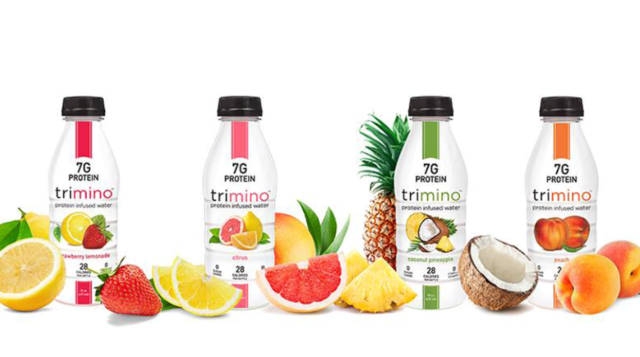 Trimino Brands, maker of a line of protein-infused waters, announced this week it has completed a six month corporate restructuring aimed at preparing the brand for retail expansion, reducing operating costs and improving in-store merchandising.

The organizational overhaul began this winter following the departure of CEO Peter Dacey, who left the company to serve as the CFO of Life on Earth. In his place, chairman and CMO Bob Leary assumed CEO duties and shortly after initiated the restructuring plan, which began by assigning VP Paul LeBlanc to explore improvements to the company’s supply chain and logistics.

Speaking with BevNET this week, Leary said the changes have made “a huge difference” in a short amount of time, mainly by reducing costs. One of the first steps, he said, was moving the company’s production to a new co-packer: Florida-based SouthEast Beverage and Bottling, which offered lower pricing and streamlined shipping.

Trimino also worked to improve relationships with its suppliers to cut costs and also reduced the number of shipping vendors it contracted with, Leary said, noting that its large and unwieldy network could lead to trouble with distribution.

“Often times it was an adventure to really track down and make sure we actually delivered product to a customer,” Leary told BevNET. “Now the level of accountability is way, way up and that’s huge.”

Based in Connecticut, Trimino produces a line of zero sugar flavored waters infused with 7 g of protein. While much of the brand’s retail footprint is focused in the Northeast, it is currently in about 7,500 stores nationwide, most recently adding chains such as Price Chopper in the Northeast and H-E-B in Texas as well as Northeast distributors McGraith and High Peak. According to Leary, the brand is also preparing to add more grocery chains in the coming months and is looking to improve its retail penetration between New York and Virginia.

Trimino is also in an additional 7,800 CVS stores nationwide; However, the chain only carries a single SKU in all but 2,500 of its stores, which has limited the brand’s visibility and sell through. The brand is currently working to improve its relationship with the drug chain by transitioning to DSD distribution, which will allow Trimino to ensure products are on shelves and visible.

“We can give [CVS] coverage from Maine on down to Virginia, so I think that will drive a lot more revenue and lower the costs to the business, compared to the relationship we have,” he said.

According to Leary, Trimino is preparing to open a capital fundraising round in January in order to finance a national expansion. He intends to stay in the CEO role until the round closes, he said.