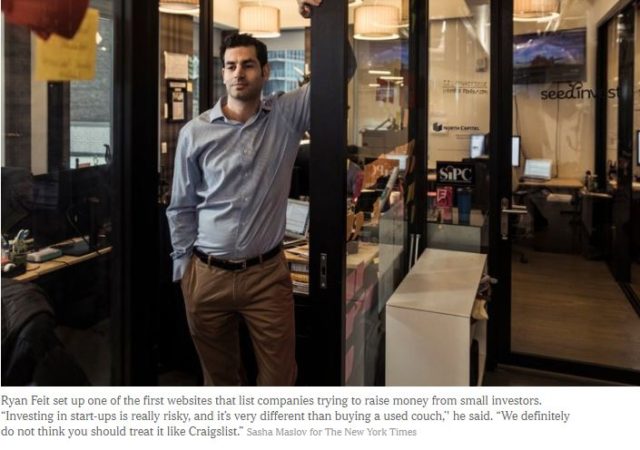 Ryan Feit was featured in a New Times Article.

Ryan co-founded SeedInvest because he saw the need for a better way to connect entrepreneurs and investors. Prior to founding SeedInvest, Ryan worked at Wellspring Capital Management and Lehman Brothers in New York City where he invested in, financed and managed dozens of private and public businesses. Ryan was instrumental in the passage of the 2012 JOBS Act, which changed 80-year-old U.S. securities laws to make it possible for entrepreneurs to raise capital over the Internet. Since then, Ryan has worked closely with members of the SEC, FINRA, the White House, and the Treasury Department on the implementation of the JOBS Act and frequently serves as a subject matter expert on startup investing and the JOBS Act for the Wall Street Journal, the Washington Post, CNBC, FoxBusiness, the Economist, the New York Times, Fortune Magazine and Inc. Magazine. Whenever given the chance, Ryan enjoys traveling and has been to 81 countries. Ryan received an MBA in Entrepreneurial Management from The Wharton School of the University of Pennsylvania.