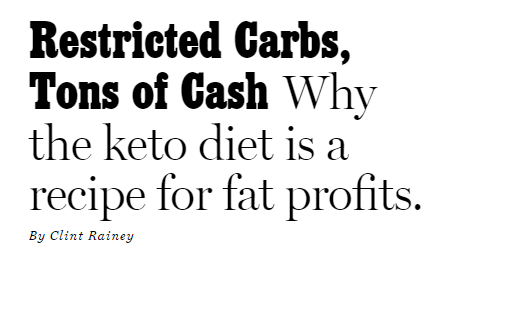 The time of the keto diet is now. Although the idea of a ketogenic diet was originally created by Mayo Clinic doctors to treat epileptics in 1923, its popularity as a weight-loss phenomenon has exploded since people started hyping butter coffee — and in the ensuing time, the fad diet has turned into a $5 billion industry.

The idea behind going keto is relatively simple. It’s evolved a bit over the years and become more complex, but the original diet split daily caloric intake into 90 percent fat, 6 percent protein, and 4 percent carbohydrates. For a 2,000-calorie-per-day diet, this translates to a daily intake of roughly two sticks of butter, five eggs, and a mere one-third cup of cooked rice. The ratio intentionally deprives the body of glucose, forcing it to tap into a backup fuel source — stored fat — that becomes ketones (the byproduct of fat that’s used for energy when carbohydrate intake is low).

Advocates argue this state of ketosis leads to weight loss, greater satiety, and improved glycemic control. Modern-day keto fanatics include Silicon Valley biohackers by the incubator-load, athletes, the thriving #ketotransformationInstagram community, and Reddit’s 860,000-member /r/keto subreddit. around all things keto is so out of control that when a group recently introduced $38 bottles of “keto compatible” unfiltered “hot dog water” at a local Vancouver festival, people weren’t sure if it was real or a prank. (It was a prank.)

But the reality is that hot-dog water isn’t all that absurd when you look at some of the other products and services that have sprung up to capitalize on the keto gold rush. In addition to the obvious deluge of cookbooks, products and services specifically targeted to keto dieters are everywhere, and plenty of people are making loads of money off of your desire to cut carbs and binge on fat.

Start-ups, of Course, Are Everywhere
The site Keto and Company — basically a one-stop web shop for all things keto — averages about 5,000 customers a month, for items like brownies with three net carbs per serving, or coconut-avocado-olive oil. Demand is “increasing consistently,” founder Ted Tieken says: In September he told CNN, “Six months ago, I stopped having to explain what keto was to the average person,” adding that lately “people get offended when I explain.”

Jeff Frese started his own ketogenic diet in 2015 after reading Tim Ferriss’s The 4-Hour Body. But early attempts to follow it revealed few good snack options existed, he says. So in 2016, he started Fat Snax, a brand that sells low-carb chocolate chip, lemon, and peanut butter cookies and a line of MCT-infused matcha described as “our tasty take on Bulletproof Coffee.” Since January, he says sales are up tenfold, now comfortably in the seven figures. This week, Vitamin Shoppe started stocking Fat Snax. “Come summertime, I expect us to be in many national retail outlets,” adds Frese, who’s quit his job in software development.

Then there is FBomb, a company whose official website URL, it’s worth noting, is DropAnFBomb.com. FBomb debuted a line of nut butters in Vitamin Shoppe stores last month and, this month, they went on sale at 2,000 GNC locations as well as 200 HEBs. The company just finished the onboarding process with Whole Foods, too. Starting in January, you’ll find FBombs at 3,200 CVS stores. Ross Taylor, the company’s “chief fat officer” (they have fun at FBomb) predicted in October that growth will only continue.