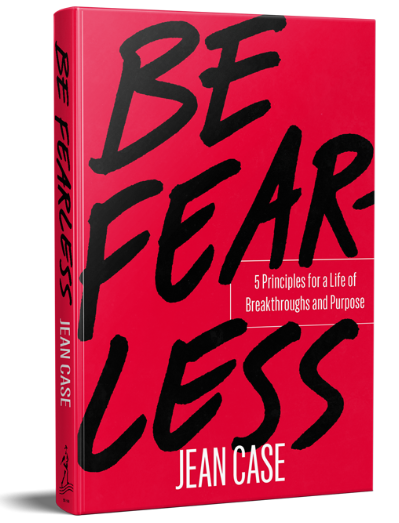 Jean Case, chairman of the National Geographic Society and CEO of the Case Foundation, sits down with “Squawk Box” to discuss her new book on how to succeed through failure.

How to push past failure to advance in your career from CNBC.

A 5-Step Guide to Overcoming Your Fear of Failure So You Can Make Your Dreams Happen (Thrive).

Jean Case’s new book, Be Fearless, will restart your life

Jean Case knows a thing or two about mustering courage and moving full velocity in the direction of one’s dreams. In her new book, Be Fearless: 5 Principles for a Life of Breakthroughs and Purpose, Case, a former AOL executive who helped bring the Internet to the masses in the 80s and 90s and inaugurated a new era at the National Geographic Society by becoming its first female chairman in 2016, illustrates the power of approaching life head-on without flinching.

From her underprivileged upbringing in the Normal, Illinois, where she was raised alongside three siblings in a single parent household, to her twenty year career in the private sector and her establishment of the Case Foundation in 1997, the philanthropist’s life models the kind of risk-taking visible in other extraordinary people she profiles in her riveting read. People like John F. Kennedy, who’s ambition landed a man on the moon in 1969; Jane Goodall, who journeyed into the wild to study chimpanzees; former roommates Brian Chesky and Joe Gebbia, who revolutionized the hospitality industry by starting Airbnb in their apartment; Sara Blakely, who created a billion dollar company, Spanx, from cut-off panty hose; and many other inspiring mavericks. In an interview with Thrive Global, the trailblazing investor and CEO of the Case Foundation breaks down the keys to squashing your fears and pursuing your big ideas:

“I like to say, ‘Make a big bet, and make history,’” Case says, chronicling the story of the founder and president of Give An Hour, Barbara Van Dahlen, Ph.D., a clinical psychologist. Van Dahlen was the sole practitioner in a mental health facility witnessing an ever-growing need for more clinicians for soldiers coming back from the wars in Iraq and Afghanistan and their families. She realized she could make a difference by offering an hour a week of pro bono therapy to people in need. That realization turned into an awareness — and big bet — that she could create a network of psychologists who could also provide an hour of their time to veterans and their kins, which eventually turned into her non-profit. “She took that idea forward one step at a time, starting right where she was, with no skill in organization building or fundraising,” Case enthuses, adding, “Now, many thousands of doctors contribute hours around the nation, offering tens of millions of dollars of free counseling for veterans and their families.”

How to Distill Whiskey. Adam Spiegel of Sonoma Distilling Company.