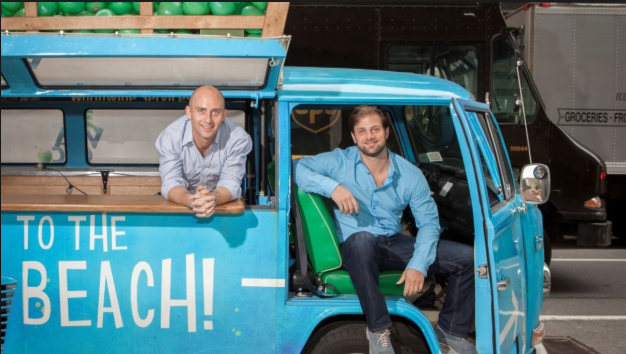 Yup, it’s that easy. Two guys with no experience in the beverage business.

How I Made My Millions — Episode 7 from CNBC.

This Is Why Pepsi Spending $1 Billion to Buy a Coconut Water Company Would Be No Shock (TheStreet).

When it comes to making acquisitions, PepsiCo (PEP – Get Report) has always been a patient bunch. But when it decides to strike, it very often strikes big and with something that could transform the company’s bottom line.

One such deal could be lurking. The soda and snacks maker is in talks to acquire All Market Inc., the owner of coconut water brand Vita Coco, Reuters reported on Friday evening. PepsiCo offered less than the $1 billion that All Market’s owners have been seeking to sell the company, the report said.

A PepsiCo spokesman told TheStreet the company doesn’t comment on rumors or speculation.

An acquisition of Vita Coco would give PepsiCo a dominant market position in coconut water, which in itself is part of a strong outlook for plant-based hydration products as consumers shift to healthier drinks. PepsiCo already sells coconut water under its One, Kero Coco and Naked brands. These offerings go head-to-head with Coca-Cola’s ( KO – Get Report) Zico coconut water, a brand it acquired in 2013.

Global sales of plant-based waters grew 21% in 2016 to about $2.7 billion, according to food and drink consoltency Zenith Global. By 2020, the market is seen having doubled to $5.4 billion.

PepsiCo chairman and CEO Indra Nooyi is no stranger to doing to deals. But to her credit, she has embodied PepsiCo’s history of doing deals that make strategic sense and aren’t at nosebleed valuations.

Read the full article on TheStreet.com