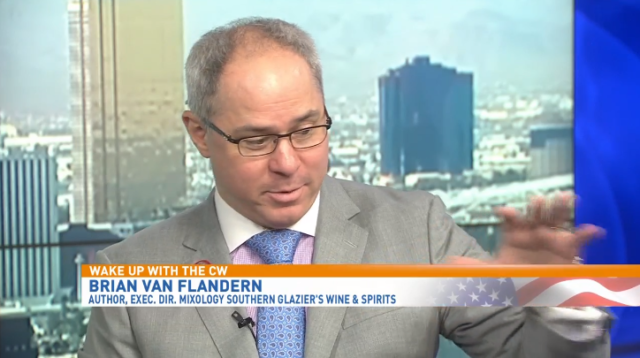 LAS VEGAS (KSNV) — Whiskey is growing in popularity around the world, and it makes a great component in many cocktails.

Brian Van Flandern, executive director at Southern Glazer’s Wine & Spirits, wrote “Whiskey Cocktails” to detail the many ways to add the spirit to your drinks.

He joined us in this week to show off a few cocktails you can make at home.

November 25th, 2018. First we were honored to have been chosen by spirits connoisseur and author Brian Van Flandarn to make the grade in his “Whiskey Cocktails” book. Now we’re even more thrilled, Mr. Van Flandern, now Executive Director of Southern Glaziers Wine and Spirits (“SGWS”), has chosen us as one of only three whiskeys to be included in his TV spot on Great Whiskey Cocktails, aired by NBC affiliate KSNV in Nevada.

Van Flandern’s comments during the segment are pretty good indicators why he chose to include James FC Hyde Sorgho Whiskey. “Today we’re going to try three different phenomenal whiskies.” And later when commenting on his “Hydeing in Manhattan” – a sorghum whiskey based derivative of the classic bourbon Manhattan, “This one is using a sorghum whiskey. It’s a naturally gluten free sorghum… James FC Hyde Sorgho Whiskey. It’s the new hot thing.”

Excuse us, but when an Executive Director of Southern Glazer’s Wine and Spirits goes on NBC TV (Nevada) in a piece on Great Whiskey Cocktails and calls James FC Hyde Sorgho Whiskey, a “phenomenal whiskey” and “the new hot thing”, for taking a bow. We couldn’t be more flattered. To quote then Vice President Joe Biden, “This is a big F’ing deal”. The piece is indicative of the incredible progress we’re making in both sales traction and brand awareness. Through the end of October, year over year 2017 vs 2018, sales of James FC Hyde Sorgho Whiskey have more than tripled. We’ve entered new markets in California, Texas and Massachusetts (the home of Mr. James FC Hyde himself) as well as continue to gain traction in existing markets like New Jersey, New York, Kansas and Nevada. And now our TV debut.

When we decided to turn to “community ownership” in the summer of 2017, seeking $1 million, we had a new fledgling, revolutionary whiskey, make from little known (in America), “natures miracle” crop – sorghum. We knew our Sorgho Whiskey was “like no other”. And we knew it was “the most unique and innovative American whiskey since the Civil War”. We said so in our original Wefunder Offering page. Now, thanks to the TV spot, we can add “phenomenal” and “the new hot thing”.

When we turned to the “crowd” in the summer of ’17 for support, we entered into an implicit understanding with investors. Join our effort, both financially and as pro active owners willing to become loyal advocates and “cheerleaders”, and we pledged to use your money wisely, and to lead the charge as “chief cheerleader”. Now, after nearly $700,000 in investment from over 1,000 new owners, we’ve: 1) expanded our markets to CA, TX and MA; 2) sales of Sorgho Whiskey are more than 3 times 2018 vs 2017; 3) we own Jersey Artisan Distilling that makes James FC Hyde Sorgho Whiskey; and 4) now we’re on free TV.