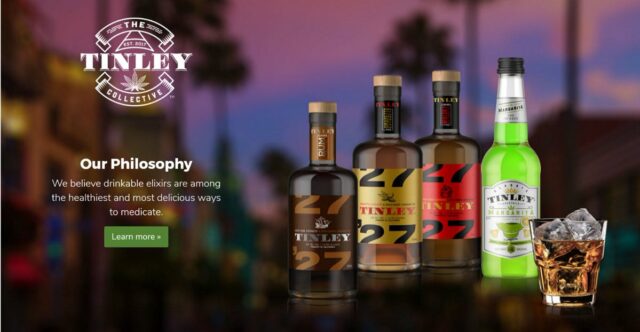 You could see it coming early on a Wednesday morning in March, when dreamers from the food and beverage industry packed a ballroom at the Anaheim Marriott hotel to learn about one of the year’s hottest trends: cannabidiol, more commonly known as CBD.

It was a half-day summit during Natural Products Expo West 2018 — and it was ushering in a part of a trade show for an ingredient long untouched by CPG.

Beyond the oils and pills that make up a sizable chunk of the market for cannabidiol, an increasing number of beverage companies are experimenting with CBD, the non-psychoactive compound that can be derived from hemp and marijuana that is believed to have health and wellness related properties. At Expo West, smaller, previously existing brands such as Buddha Teas and BLK Water showed newly-developed CBD SKUs, while Tree Below Zero showcased an entire product portfolio based around the ingredient.

In the months since Expo, innovation hasn’t slowed. Shot makers like Ablis and California Juice Co, coffee brands like Cuvee and Kickback Cold Brew, and even craft beer brewers have unveiled line extensions or brands built around the functional ingredient.

As recreational marijuana sales continue to open up in states across the country, and with political leaders across the aisle calling for legalized hemp farming and distribution, the market for both CBD and Thetrahydrocannabinol (THC), which produces the psychoactive effects associated with feeling “high,” has exploded. The legal cannabis industry as a whole brought in $9 billion in 2017 — and that’s prior to the launch of recreational sales in California this past January. Hemp-derived CBD is currently legal in 46 states and The Hemp Business Journal has estimated hemp and CBD food, beverage, and cosmetics will grow to a $1.8 billion market by 2020.

Still, despite entrepreneurs’ willingness to experiment, CBD beverages haven’t yet become a wave, and there are plenty of obstacles in the way: production, distribution, branding, and an uncertain regulatory and shipping environment are all drags on what is expected to be a huge business.

Those challenges won’t stop the people are still looking to the future, however.

For a look at that future, check in with a beverage veteran.

L.A. Libations EVP David Meniane no longer goes a day without taking CBD. Since first deciding to explore the space, he has immersed himself in functional beverage brands building around CBD, sampling hundreds of products over the course of the past year. During that time, Meniane became a true believer in CBD’s physical and mental benefits. With a green light from their investors, The Coca-Cola Company, it’s a question of “when,” not “if,” L.A. Libations will partner with a CBD-based beverage brand.

“The amount of people involved in CBD is higher than anything we’ve ever seen,” Meniane told BevNET in a phone call in March. “Eighteen months ago I don’t think we had even one call from a CBD company. In the last ninety days, I think we spoke to 20 different companies that do different things.”

As entrepreneurs across categories seek to launch brands, beverage developers such as Sovereign Flavors have likewise been seeing a sizable uptick in clients.

Katie Allen, account executive at Sovereign Flavors, told BevNET the company first began getting inquiries for CBD beverages in 2016, but over the past six months the amount of requests has “ramped up.” The majority of these clients, she said, are seeking to develop functional products focused on health and wellness.

But investors, while showing showing a growing interest in CBD beverages, don’t seem to be fully sold on the concept. Most investment activity thus far has been focused on marijuana producers and cultivators rather than beverage-centric businesses, which could see further growth as overall interest in the cannabis market continues to rise.

Up to now, much of that activity has been limited to Canada, where cannabis companies are allowed to be listed on the country’s stock exchange. In late February, Toronto-based Tinley Beverage Company, which produces both THC and CBD-infused drinks, raised $7.9 million in a private-investment-to-public-equity transaction. Meanwhile, liquor conglomerate Constellation Brands’ $191 million investment in Canadian cannabis company Canopy Growth last October was discussed in the media as one of the first major plays from a mainstream corporation in cannabis products.

Kevin McGovern, chairman and CEO of McGovern Capital and co-founder of new age beverage brand SoBe, has invested in several medical cannabis companies around the world including Canada-based WeedMD, Israel Plant Sciences, and INTIVA. McGovern said he sees “the floodgates” about to open for the cannabis market.

Still, he remains cautious of the beverage space for CBD and cannabis products as brands scramble to establish themselves on the ground floor.

“To what extent will this ‘green rush’ be a ‘green avalanche’ similar to Colorado has been [for cannabis]?” McGovern said. “I think there’s a lot of people in the cannabis business in California, but frankly I think there’s other states that are even more opportunistic because there’s less noise going on. There’s a lot of people racing to this ‘green rush’ but many of them really don’t understand the marketing aspects that are necessary for a successful product.”

While the hype is growing, CBD beverages still face a long road ahead. Allen said she’s seen many of her clients struggle to find willing co-packers, while some entrepreneurs have said they’ve been turned away from skittish retailers.

Educating the Consumer (And the Buyer)

Consumer interest in CBD products has been rising for several years. According to data from cannabis review and tracking website Leafly, CBD saw a 521 percent increase in user interest between August 2014 and July 2015, making it one of the most searched terms on the site. With marijuana making leaps toward the mainstream, bringing a built-in consumer culture with it, many people are already aware of CBD’s functional benefits and are looking for an affordable delivery vehicle.