Mexican residents (127 million) are finding it hard to grasp that the US now has twice the consumption of Tequila that Mexico itself has. Wait until China gets their Sombreros & Tequila on! 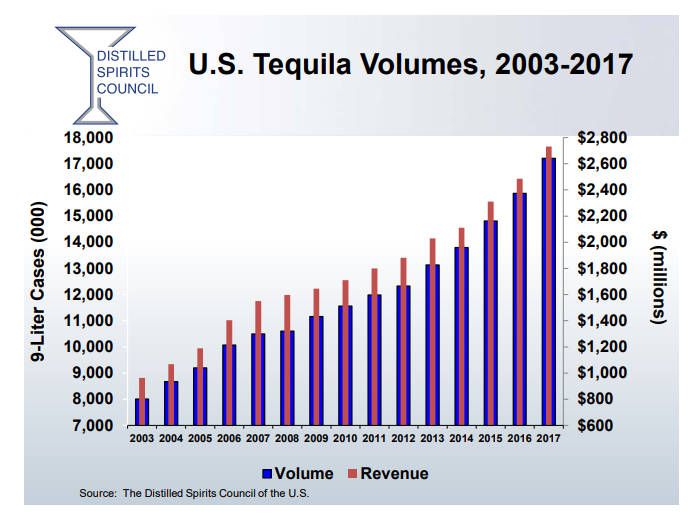 And remember, the Chinese can’t make Tequila. So the industry doesn’t have to worry about corporate espionage or illegal dumping like in other industries. Unless of course, they try to buy out the Beckman’s who once had a near 30% market share. Or do some major land grab in Jalisco and/or directly acquire the family distillers who might entertain offers from deeper pockets to help them deal with a potential agave shortage. Nah.

How Tequila is Made.

And a couple of our favorite rising stars, Comisario Tequila and Rock N Roll Tequila..

Mexico has a grande dream to share more of its national treasure with China. And if it comes true, China could become the world’s largest home to hangovers.

The Mexican National Chamber of the Tequila Industry said recently in Beijing that it wants China to become the world’s largest tequila consumer in the next three to five years, China’s official Xinhua News Agency reported last week.

Sales of tequila in China this year are expected to reach $52.7 million, up 14% from a year earlier, according to market research firm Euromonitor, which said the U.S. is expected to down $5 billion worth of tequila this year.

Full story here.
(PS China is expected to grow to $450 Billion – not a misprint – in booze by 2021)
China’s Embrace of Tequila Affects Texas, Mexican Markets (TexasTribune).
International negotiations that have lifted a longtime ban on tequila in China will have big implications for Mexico — and are likely to benefit fledgling producers and distributors in Texas, too.
The Regulatory Tequila Council in Mexico estimates that in four years, China will become one of the world’s leading tequila consumers — ahead of Mexico and just below the U.S. Projections suggest that by 2018, tequila exports from Mexico will rise from just below $5 million in 2013 to $100 million, and Chinese consumers will drink about 10 million liters of tequila, the equivalent of five Olympic swimming pools.
Full story here.