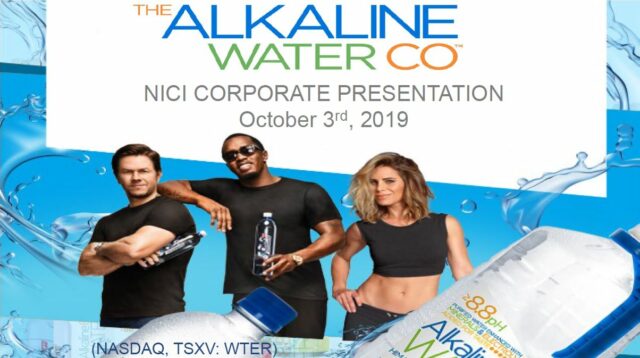 Trading near lows of the year, while continuing to report record numbers – $10.4 million in the most recent quarter – it is in our opinion that this is the best time to initiate and/or add to positions – since we have been following the company in 2015.

Why is the stock down? Quite simply, fast money in – the kind that propelled it from $1.00 to $5.00 in six months – often becomes fast money out. The flurry of buying was fueled by news of involvement in CBD combined with a period of time (exact same time) that Tilray, for example, ran from $50 to $150.

That and investors saying “..what do you mean you won’t be selling any CBD water until the FDA says it’s okay.” To which we’ll add, it’s probably wise to acquire a meaningful position in WTER before the FDA says it’s okay than waiting until after. We firmly believe FDA ‘okay to market’ guidance is coming, possibly in early 2020.

Ultimately continued sales growth will move the shares higher – and the outlook for next year and the year following, is as bright as it can be with the sales of flavored water, sales from Aquahydrate, potential sales from CBD infused waters and sales from convenience stores (they are in 5,000 with 145,000 to go) all contributing.

Ultimately sales also put a floor on all stocks, at some point. If WTER finishes this year (ends in March) with $46 million up from $31 million – we see a floor made of solid granite.

Putting up growth numbers better than 20% is what defines ‘growth stock.’ While growing from $8.6 million to $10.4 million in the most recent quarter is impressive, look at the numbers below.

With 64 million shares outstanding post-acquisition, WTER is being valued at 1.4 times sales, which is just plain ridiculous – and we’re pretty good at this!

Dr. Pepper (KDP) for example paid Core Water $525 million, or around 4x sales. That would put WTER at $4.60 – when Aquahydrate’s number are folded in. Why did Dr. Pepper pay 4x sales? Because they have the power (presumably) to take a brand that is doing $150 million in sales and proven consumer acceptance to $800 million or even a billion in five years.

We have often said in the past, with start-up beverage brands – we are concerned with numbers only in the sense that they are showing consumer acceptance.’ Just a quick glance at the numbers above screams “consumers love Alkaline88.”

It’s a fact. They are closing in on sales of $1 million a week, versus $500 thousand for all of 2014! And those are wholesale numbers.

If there is anything we can leave you with to remember, it’s this. People who love (aka know and trust) Aklaine88 – in all likelihood will also feel they know and can trust flavored Alkaline88, and even more importantly trust that A88 CBD Water, A88 CBD Energy Shots, A88 CBD Drops and A88 Capsules will be safe and have consistent quality – bottle after bottle, shot after shot, drop after drop.

The material assumptions supporting these forward-looking statements include, among others, that the demand for the Company’s products will continue to significantly grow; that the past production capacity of the Company’s co-packing facilities can be maintained or increased; that the Company will receive all necessary regulatory approvals for the production and sale of CBD-infused products; that there will be increased production capacity through implementation of new production facilities, new co-packers, and new technology; that there will be an increase in number of products available for sale to retailers and consumers; that there will be an expansion in geographical areas by national retailers carrying the Company’s products; that there will be an expansion into new national and regional grocery retailers; that there will be an expansion into new e-commerce, home delivery, convenience, and healthy food channels; that there will not be interruptions on production of the Company’s products; that there will not be a recall of products due to unintended contamination or other adverse events relating to the Company’s products; and that the Company will be able to obtain additional capital to meet the Company’s growing demand and satisfy the capital expenditure requirements needed to increase production and support sales activity. Actual results could differ from those projected in any forward-looking statements due to numerous factors. Such factors include, among others, governmental regulations being implemented regarding the production and sale of alkaline water or any other products, including products containing hemp/CBD; the fact that consumers may not embrace and purchase any of the Company’s CBD-infused products; the fact that the Company may not be permitted by the FDA or other regulatory authority to market or sell any of its CBD-infused products; the Company and AQUAhydrate being unable to realize the anticipated synergies from the Transaction; the Company or AQUAhydrate not receiving the requisite approvals for the Transaction; additional competitors selling alkaline water and enhanced water products in bulk containers reducing the Company’s sales; the fact that the Company does not own or operate any of its production facilities and that co-packers may not renew current agreements and/or not satisfy increased production quotas; the fact that the Company has a limited number of suppliers of its unique bulk bottles; the potential for supply-chain interruption due to factors beyond the Company’s control; the fact that there may be a recall of products due to unintended contamination; the inherent uncertainties associated with operating as an early stage company; the inherent uncertainties with mergers, acquisitions and other business combinations; changes in customer demand and the fact that consumers may not embrace enhanced water products as expected or at all; the extent to which the Company is successful in gaining new long-term relationships with new retailers and retaining existing relationships with retailers; the Company’s ability to raise the additional funding that it will need to continue to pursue its business, planned capital expansion and sales activity; and competition in the industry in which the Company operates and market conditions. These forward-looking statements are made as of the date of this news release, and the Company assumes no obligation to update the forward-looking statements, or to update the reasons why actual results could differ from those projected in the forward-looking statements, except as required by applicable law, including the securities laws of the United States and Canada. Although the Company believes that any beliefs, plans, expectations and intentions contained in this news release are reasonable, there can be no assurance that any such beliefs, plans, expectations or intentions will prove to be accurate. Readers should consult all of the information set forth herein and should also refer to the risk factors disclosure outlined in the reports and other documents the Company files with the SEC, available at www.sec.gov, and on the SEDAR, available at www.sedar.com.

Disclaimer, Client The Alkaline Water has compensated Institutional Analyst Inc with two-thousand five hundred dollars per month and one thousand shares per month for IR/PR services.